I think I'm not the first one to talk about this problem even here in dev.to. I quick research trying to found any solution concluded with the image that is the head of this text. The node_modules folder is where your project dependencies are stored, common knowledge. Its weight is also common knowledge.

Why I decided to vent my frustration now

Black Friday is here! It means discounts and the opportunity to update your computer. Therefore I decided to buy a SSD to boost the performance of my laptop, from 1 TB HDD to 500 GB SSD. All my files right now sums 299 GB, so I will not lose much space, but I decided to do the housekeeping work even so, this includes making backups of my projects. Not all projects I make I put on GitHub, sometimes I'm just experimenting and it is not worth the trouble, but I keep them anyway.

When I started the copy & paste process I remembered how heavy node_modules are...

One example that shows clearly the problem is the node_modules folder of my ToRead CLI project as you can see in the imagem below.

The size of the folder is not really the problem although I will get to that later, but 15.000 files and more than 1800 folders!? Are you kidding me?! It is a simple CLI project with 5 files! Just for a comparison, let's see how many files and folders there is in the Windows folder:

While the system was counting I really thought node_modules would win this, but no. In any case, the folder has almost half of the amount of files an entire operating system has!

As I've said, the problem when copying node_modules folder from one place to another is not the size, it is the amount of files and folders, the complexity of the tree. It is a nightmare for a HDD. It takes many minutes to discover all files let alone copy them. In the end, it also impacts npm performance and there are memes for that also. 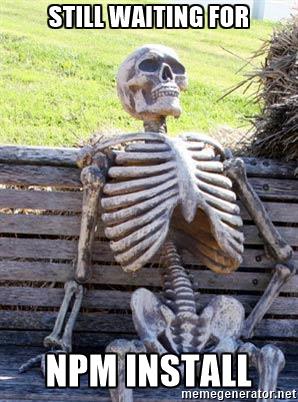 Other comparisons come from my passion for serverless. It is not rare for me to implement the same function in both Java and Javascript and since you have to bundle the function along with its dependencies it is a good way to compare which one is more efficient in dependency management. In one of my projects I wtote the function in both languages with virtually the same features and Java bundle size is 11.1 MB and NodeJS bundle size was 29.0 MB. Therefore, NodeJS can do a better job at the size of dependencies as well.

What other languages do

Besides NodeJS I have experience dealing with dependencies in two more languages: Java and C#. They have, in my opinion, a very similar way of handling dependencies and a much more efficient way than NodeJS.

C# follows the same idea, you list your dependencies in a .csproj file and Nuget takes care of the dependencies having also a remote and a local repository. It is much more efficient to handle dependencies this way, download once use in any project locally.

I think there is also a difference in culture and the way the languages were structured and what people see as libraries. Java has a very mature core of libraries that can deal with almost anything, common scenarios or not. Therefore, libraries in Java generally are meant to be an abstraction of what Java already has, making it easier to use. Therefore, the libraries have a more shallow dependency tree, reaching the Java core libraries much quicker.

What I see in NodeJS on the other hand is the opposite, everything can become a library, even a library that sums two numbers (hypothetical example, I hope) and libraries are heavily dependent of one another generating deep dependency trees, many files and folders.

I am certainly not qualified to criticize NodeJs structure and engineering, but as a user I clearly see a problem and some lessons from other languages that can be used to improve the dependency management, which is paramount nowadays for almost every application. What do you think this problem came to be and what has been done to solve it? It would be very interesting to hear from more experienced developers what you do to remedy this.

Leonardo Teteo
Java Web Developer with a passion for Spring and cloud computing. Know a thing or two about AWS. Trying to learn NodeJS lately with the help of TypeScript.
A love letter to TypeScript
#typescript #javascript
Is it a good idea to use CLIs to generate projects in JavaScript?
#beginners #help #javascript
My first serious project in NodeJS: ToRead CLI
#node #cli #typescript

Once suspended, leoat12 will not be able to comment or publish posts until their suspension is removed.

Once unsuspended, leoat12 will be able to comment and publish posts again.

Once unpublished, all posts by leoat12 will become hidden and only accessible to themselves.

If leoat12 is not suspended, they can still re-publish their posts from their dashboard.

Once unpublished, this post will become invisible to the public and only accessible to Leonardo Teteo.

Thanks for keeping DEV Community safe. Here is what you can do to flag leoat12:

Unflagging leoat12 will restore default visibility to their posts.