image by Camilo Sanchez, sharable via 9Creative Commons Attribution 3.0 Unported License](https://creativecommons.org/licenses/by/3.0/legalcode).
People love to ask variations on the question “is PHP dead?” And for added fun, they like to ask it of people who still use it for their jobs, as this article points out. PHP remains extremely popular; something like 79% of websites whose server-side programming language is known use PHP. So to me, the interesting question is not “Do developers still use PHP?”, but “Why do people keep asking if developers still use PHP?”

Part of the PHP hate may come from its origins back in the early days of the web. PHP was developed out of C by Rasmus Lerdorf in 1994, who said it was never intended to be a programming language--he just needed better tools to do stuff with the web that nobody was yet doing in 1994. As a result it’s been derided for its inconsistent syntax, which makes sense if you remember that it was built by one guy trying to figure out how to get his website to communicate with databases. It’s a language of necessity, not careful design, and it’s old. Those facts alone might be enough to turn away some developers.

There are some good reasons to believe that PHP might be on its (very long) way out, in the same way that Rome was “falling” from the moment it stopped expanding. Promising new alternatives like Node for Javascript have been cropping up in the last few years. And in fact, that 79% is actually 79.1% as of this month, whereas back in April, it was 79.2%. So for a developer who already knows Javascript (or Python, or ASP.net), it might be tempting to say that PHP is holding the industry back. It might also make someone ask a developer who uses PHP on the regular whether it isn’t “dead yet”, when the very fact that that developer uses PHP at work means that by definition it is not. People are asking “Is PHP dead yet” because they wish it was. 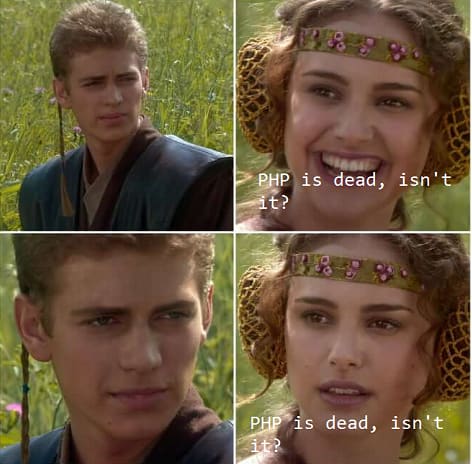 People who work in tech sometimes assume that the thing that does a job most efficiently in a vacuum will be the thing people automatically switch to using, and that any failure to do so immediately is a bad choice. However, existing infrastructure matters to making decisions about what to do next. If someone invented a new paving material that was easier to make than asphalt, it wouldn’t be feasible to instantly replace all existing roads with NewAsphalt, or to stop maintaining those existing roads. The proliferation of PHP means that it’s likely to persist for a while. After all, there are people who still code in “outdated” programming languages like COBOL in order to work on older digital infrastructure.

Additionally, company culture and experienced senior developers all play a role in which languages get used. Many big players in the web use PHP for back-end stuff, which means they’ll expect their employees to work with PHP, which means that there will be highly skilled people working at desirable companies who use PHP, which means PHP will--well, you get the idea.

So the real question on the table is: with these new alternatives in play, if you want to do server-side web development, do you need to know PHP?

Not necessarily. While a number of companies use PHP, some of those, like Wordpress and Facebook, account for a huge amount of web infrastructure (which is probably driving up that 79% of websites number). If you’re seeking work with a web juggernaut that is known to rely on PHP, it’s certainly worth considering. However, it’s certainly not the prerequisite that it might have been even a few years ago, and very few developers use it exclusively.

However: anecdotal evidence suggests that knowing a less-used programming language can be very valuable to the right employer. Those engineers who can still write in COBOL? They can effectively set their price. PHP might someday be similarly valuable if the infrastructure persists but the knowledge on how to maintain it does not.

I’m curious, though--how often do you encounter the “is x dead yet” question? What kinds of things do you do on the regular that make people ask “oh, are people still doing that?” Let me know in the comments.

Run [X]
Tesla Bot is a great example of how NOT to develop a product
#career #ai #watercooler #tesla
Embrace Remote Work or Perish
#discuss #healthydebate #remote #career
What sites do you use to share your coding portfolio?
#discuss #career #tools #portfolio

Once suspended, run-x will not be able to comment or publish posts until their suspension is removed.

Once unsuspended, run-x will be able to comment and publish posts again.

Once unpublished, all posts by run-x will become hidden and only accessible to themselves.

If run-x is not suspended, they can still re-publish their posts from their dashboard.

Once unpublished, this post will become invisible to the public and only accessible to Nočnica Fee.

Thanks for keeping DEV Community 👩‍💻👨‍💻 safe. Here is what you can do to flag run-x:

Unflagging run-x will restore default visibility to their posts.