Trick question of the week:
Why is it important for your product/service to engage with developers?

📢But first, an announcement.
This podcast has a new home: DevRelx.
DevRelx is a hub for developer marketing and DevRel professionals.
Along with all episodes, you can access industry news, developer population insights, job openings and more, to empower developers and build and grow communities.
#stayhome while DevRelx brings you rich content to boost your DevRel game.
Check it out at Devrelx.com.

There are numerous examples of products that opened their arms to developers. Numerous are those that saw their growth rise in levels they had never imagined. Levels that ended up shaping the world as we know it.

"How you can engage developers" is our quest in this podcast and our book. Being authentic, having solid documentation and a mindset that leads you to help developers solve problems, are the topics that have come up most often.

Today we are joined by Mike Pegg to discuss why and how Google Maps started engaging with developers (spoiler alert: It started with kind-of-a "hack") and how you can work with agencies to enhance your outreach efforts.

📍Want us to put a pin to the episode? Here it is.

Mike Pegg leads Google Maps Platform Developer Relations. His team helps developers add Google Maps to their web and mobile apps through guides, samples and outreach programs. He has been involved with Google Maps from the beginning. He would go on to incubate developer marketing efforts for several developer products at Google including the Maps APIs, Android, Chrome, Firebase and Flutter, and led the Google I/O developer conference from 2011-18. Mike is an author to the "Developer Marketing + Relations: The Essential Guide" book. 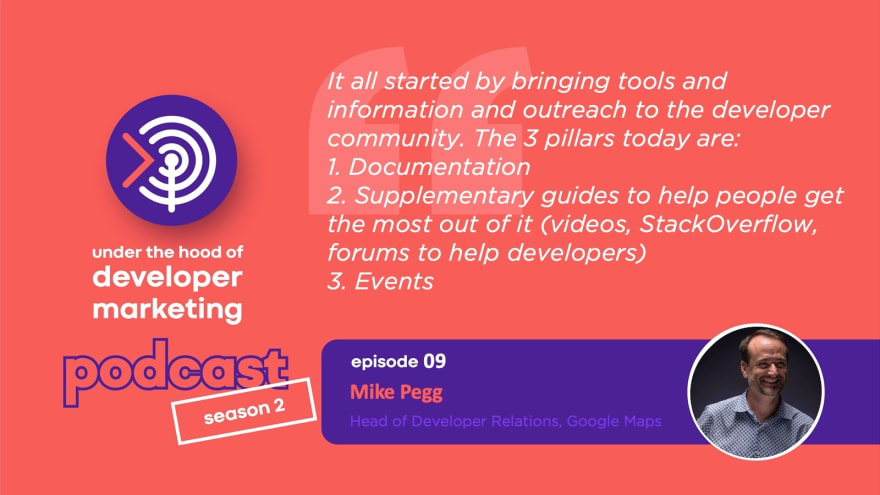 How to write a blog post: The four-drafts method

Asking The Right Question In The Interview

Interview with Charity Majors: 6 Key Career Lessons From the CTO of Honeycomb