This episode was created in collaboration with the amazing Amanda Cavallaro.

There are many Javascript frameworks, and even if you never used most of them, you've probably overheard their names. Then there's Marko.

I'm actually not sure how popular it is - it has very respectable 10k github stars, which should indicate a moderately popular one. On the other hand, nobody even mentioned it in State of JS survey, and blogging sites like dev.to and hashnode don't even have "marko" tag.

So what is Marko even?

Marko is a framework somewhat similar to Svelte or Vue. Each component lives in .marko file, and there's a compiler that turns it into Javascript a browser or Electron can run.

There are some big differences:

We'll follow the usual order - first create app, then add Electron to it.

We need to stop it from launching web browser, as we want to use Electron instead, so edit package.json and fix the dev line by adding --no-browser:

It just needs to launch the app in Electron. It's identical to what we had with other frameworks, just port number is 3000 this time:

Let's replace this file by this:

This means we have app-layout responsible for stuff like html headers, and then hello-world is our main component.

As these are custom HTML elements, they all must contain -. You cannot just call your component <app />.

This file is already created by the @marko/create command, but we need to tweak it a bit by adjusting top level styling more to your liking.

input is where props go. input.title is the prop we passed in <app-layout title="Hello Electron">. input.renderBody is the prop passed inside the tag - in our case <hello-world />.

And since it's just a Hello World, here's a very simple app component:

All this was a surprisingly boilerplate free experience! 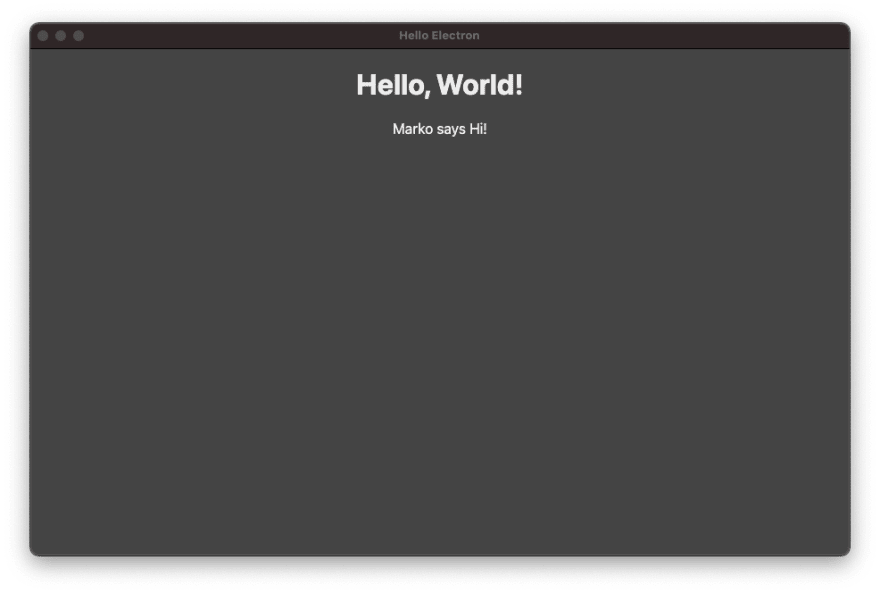 In the next episodes, we'll try to port our file manager app to Marko.