This is it. 31 blog posts in 31 days. Writing a month of flutter has been a ton of work but also lots of fun and a good learning experience. I really appreciate how supportive and and positive everyone as been.

For the series I've been posting on bendyworks.com, DEV, my personal blog, and Medium. After publishing to these sites, I would put the Bendyworks link on Twitter, Reddit, and the Flutter Study Group Slack.

Posting to DEV was easy as they use Markdown just like the Bendworks blog. DEV also has built in support for a series of posts so it's easy to read the entire series. I did have to manually upload any embedded images. DEV also has a number of liquid tags for embedding things like GitHub issues that I didn't make as much use of as I should have.

Blogger is rich text so it was easy to copy/paste the rendered posts. This would hotlink all the images though so I had to remove them and manually re-upload them.

Medium will only support canonical links if you import from a URL for some reason. They would grab any images and host them on their CDN so no manual uploading. Importing would lose all the code snippet formatting though so I would have to fix all of that.

Bendyworks received the most page views which is not surprising since those were the URLs shared on Twitter/Reddit/Slack. DEV was second with with Medium and my blog getting negligible views. 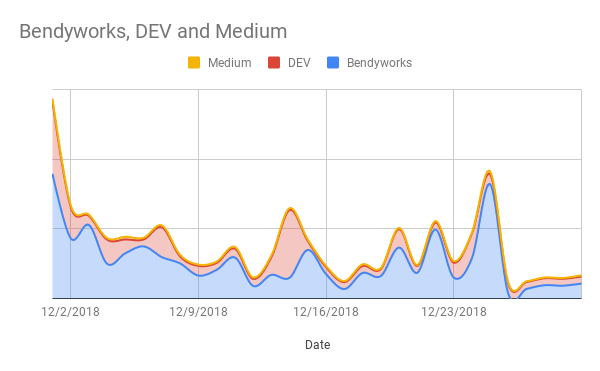 For engagement DEV was the leader with lots of ❤️ and Twitter close behind. Reddit had some upvotes but not that many and only a few claps came from Medium. 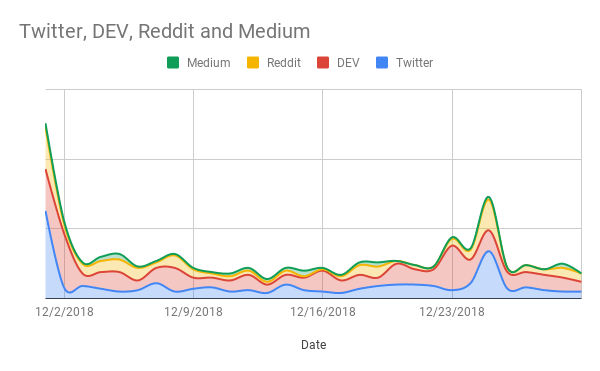 The real breakout for me here was DEV. I had never posted anything or used it much but I found the community very friendly and engaging. I received a lot more activity from the 600+ followers up built up there than the almost 9000 followers I have on Twitter. If you're not on DEV yet, sign up and follow me.

Kicking off I had three main goals

I certainly become a better Flutter developer and learned a lot along the way. I would like to try more architecture patterns but the need to always be publishing didn't leave me with much room for exploration. Maybe I could have written more "I tried this and here why it didn't work" posts but I felt pressure to always deliver progress.

I am much better at throwing words onto a page and coming out with a decent post. One aspect of blogging that I constantly struggle with is keeping posts small and digestible. It's easy to get into the mindset that posts have to be long and perfect. Short and to the point is usually better though.

Working on improving project requirements kind of fell by the wayside as I tried to keep up with posting every day. It just wasn't a priority.

The app isn't done yet but it has Sign in with Google, a home stream, and fancy animations.

Miguel submitted a pull request fixing a bug on Android where the bottom navigation theme would break on sign in. He fixed it by wrapping the HomePage Scaffold in an AnnotatedRegion widget.

A huge thank you goes to Pearl for proofreading every single post and reviewing all the code, sometimes late at night at the last minute. I couldn't have done a month of Flutter without her help.

Thanks also to: Unsplash for all the featured images. @NinaLimpi and unDraw for the fantastic illustrations. @tommy_emo_ for the awesome icon.

All of you for reading along and your feedback and support.

I'm going to keep developing Birb and writing about it as "a month+ of Flutter". Just don't expect posts every day. For example I'd like to finally get a readme written and take a second look at something I didn't get running before.

Be careful Of This Java Optional Method

Learn to use Decorators once and for all