The headline is that 7.06% of all PS5s sold since launch have been resold on eBay or StockX, as according to VGChartz 2.067 million PS5es have been sold in the US through 1/16, while on eBay/StockX 145,967 had been sold in the same time frame.

But clearly eBay and StockX are not the only places people are selling and buying PS5s. Searching OfferUp and scanning the active listings for most of the largest metropolitan regions of the USA ,filtering on >$400 and pickup only.

This is to be compared to eBay's current 5881 active listings (StockX has 280), which would suggest that OfferUp's market size is up to 5.5x the size of eBay's.

However, these numbers are larger than the reality, due to fake listings, stale listings, and other items getting caught up in the search, but that is also offset by some listings being for multiple PS5s and I only looked at 18 city metros. From my examination of some of the data I would think that is no more than 20%, but to be conservative let's call it 50% of all the listings. Further if we assume items sell at half the rate of eBay, it would increase the total resold to 11%, though more realistically it would be closer to 15%, with another 2% of the total PS5's sold just sitting trying to be resold on eBay/OfferUp/StockX/etc...

Returning to eBay's sold listings, prices dropped ~$300 by Christmas from the post-launch peak, and unlike the Xboxes prices have remained fairly stable since the start of the New Year at $799 for the PS5 Digital, and $849 for the PS5 Disc. Sales have dropped down to ~350/day for the disc version and ~100/day for the Digital. 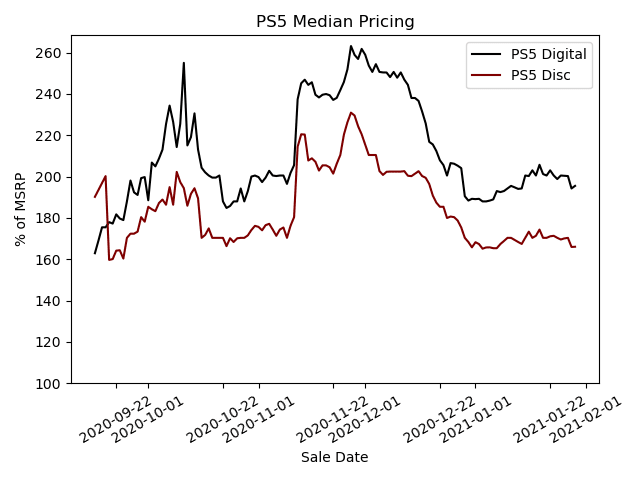 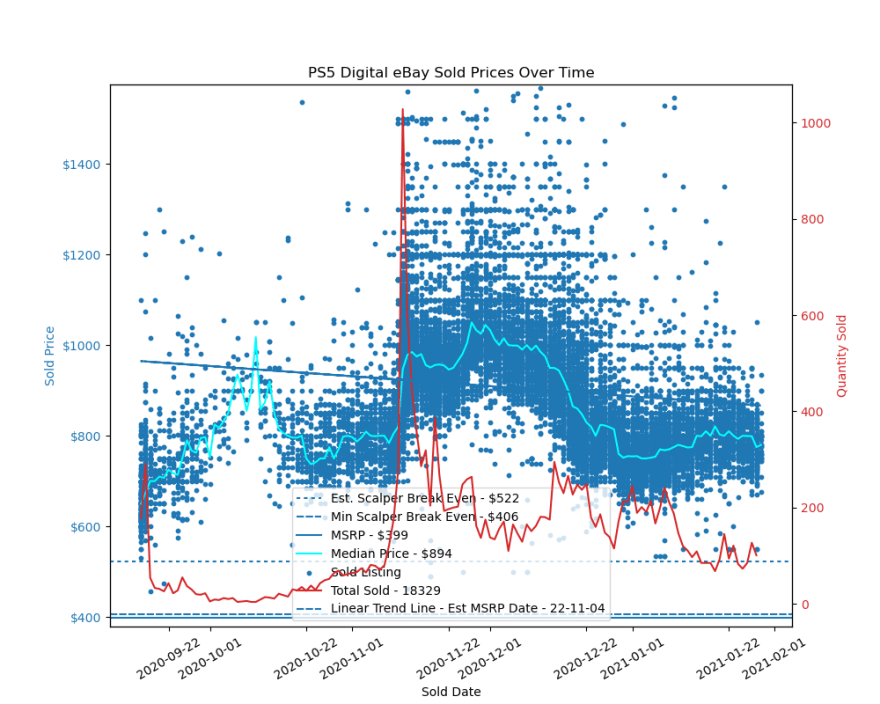 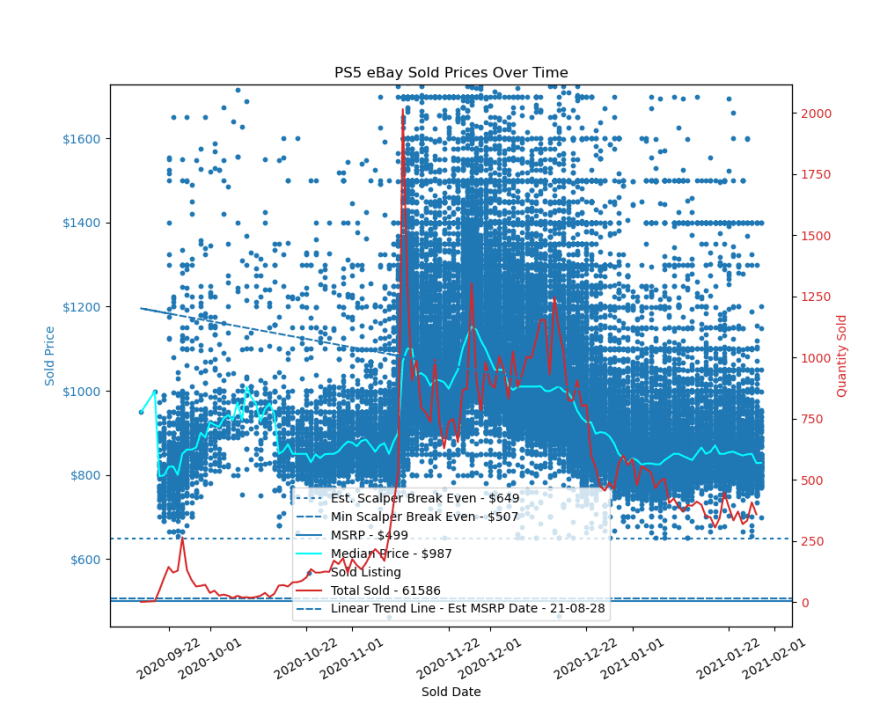 StockX is nearly as large a seller of PS5es as eBay, selling only 4% fewer PS5s, though 21% less total sales dollars, and 36% less profit for the scalpers. Perhaps due to StockX's ask/bid system, forcing every seller to sell at the lowest current price, it pulls prices to be lower as buyers don't have to scan hundreds of listings and compete against each other as much. 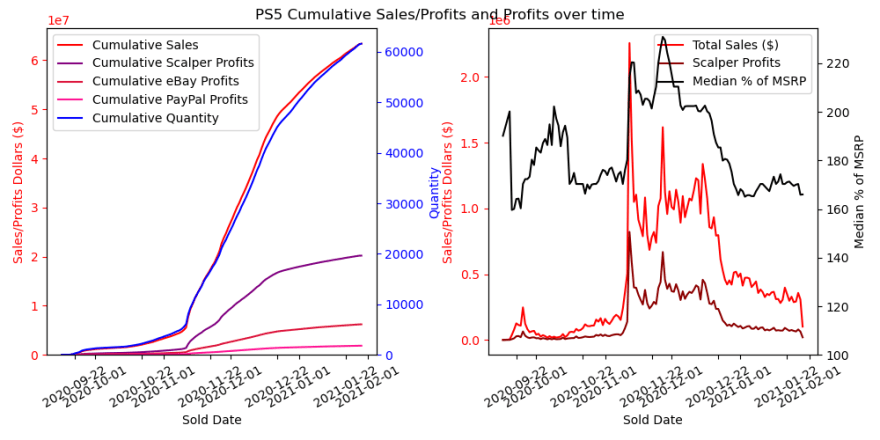 For the cumulative sales/profits, profits have not leveled off nearly as much as for the Xbox, with there still being a noticeable positive slope to the profit trendline, though it has dropped significantly as the market prices have been brought down.

Below are the weekly eBay and StockX sales compared to the VGChartz sales of that week. I did have to estimate the StockX # sold each week, using the eBay number as a proxy and using the ratio, which the totals are below. These numbers combine the PS5 Digital and Disc. Most notable is that week after week, the % of PS5s resold of the total number sold increases, one must assume people figure they can wait to play games and make a small profit now. 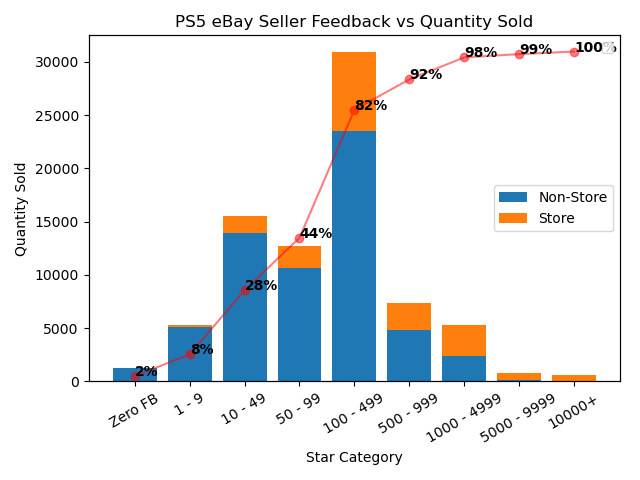 Compared to the Computer hardware, there’s a much higher percentage of the sales being by eBay Stores, whether these are real stores (e.g. Newegg) or scalper eBay stores reselling for a huge market, either way they are profiting. Fully 40% of PS5 sales are from sellers selling just one or two consoles, again those who were opportunistic and able to get their hands on one to resell. For true scalpers, it’s at least 35% of the market of those selling 5+ consoles. 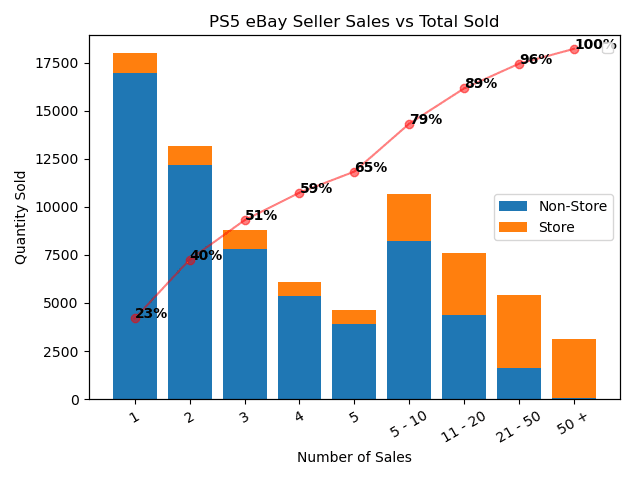 Similar to the Xbox One S/X, the launch of the PS5 has driven up PS4 and PS4 Pro pricing. Likely many are reselling their consoles with games for a bundle deal, and the sales volume doubling for a while before coming back to prelaunch sales volume. 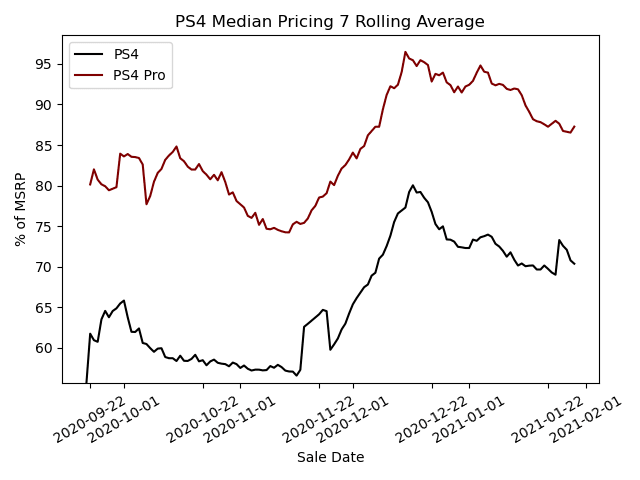