The headline is that 6.85% of all Xboxes sold since launch have been resold on eBay or StockX, as according to VGChartz 1.562 million Xboxes have been sold in the US through 1/16, while on eBay/StockX 109,948 had been sold in the same time frame. And, guessing here, once we include FB Marketplace, Craigslist, various Discords, subreddits, Twitter DMs, etc... the number has to be well north of 10%, I would guess 15-20%, but I can only point to data on that first 6.84%.

Prices significantly dropped just before Christmas, I assume people were overspending to get a console to give as a present, but the pricing has slowly been increasing lately. However, the pricing doesn’t tell the whole story, when looking at the number of sales per day there has been a dramatic drop off, the Series S is now about 100/day from an average of 300/day before and the Series X down to about 200/day from averaging closer to 800/day. I believe those who wanted the consoles got them, and now those whose patience is finally running out. 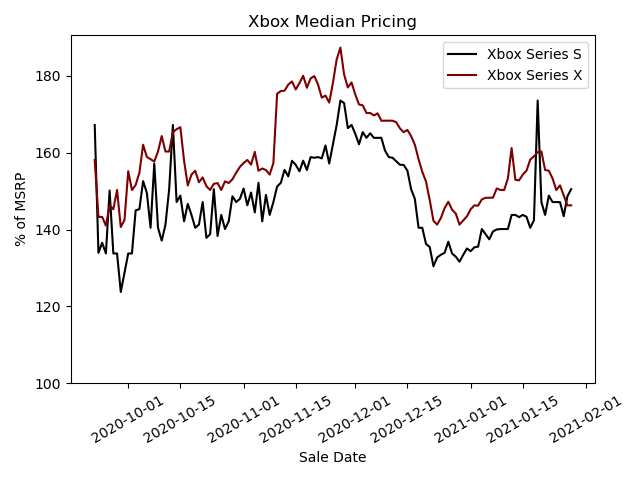 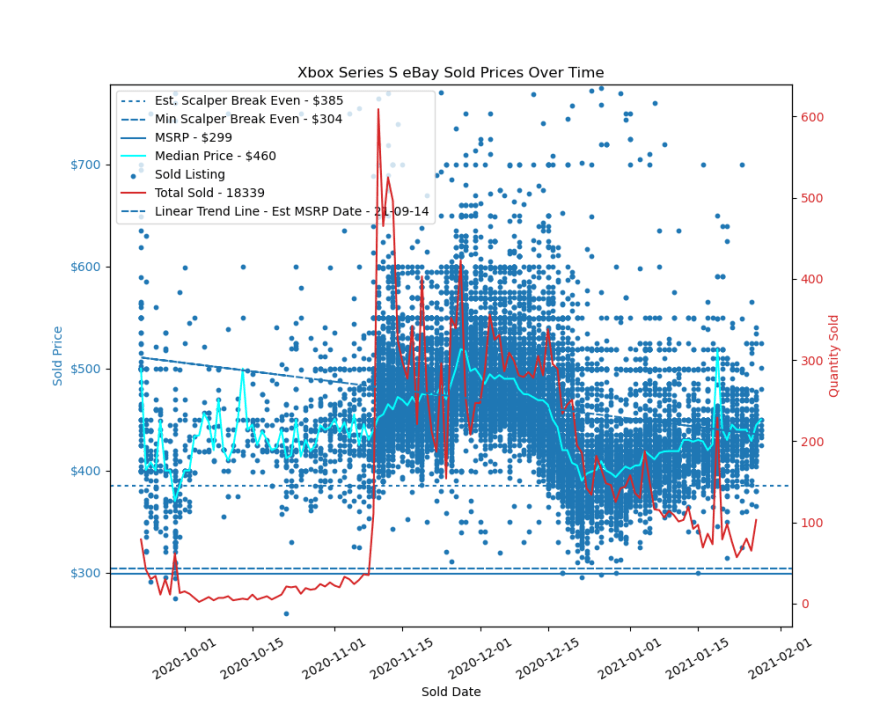 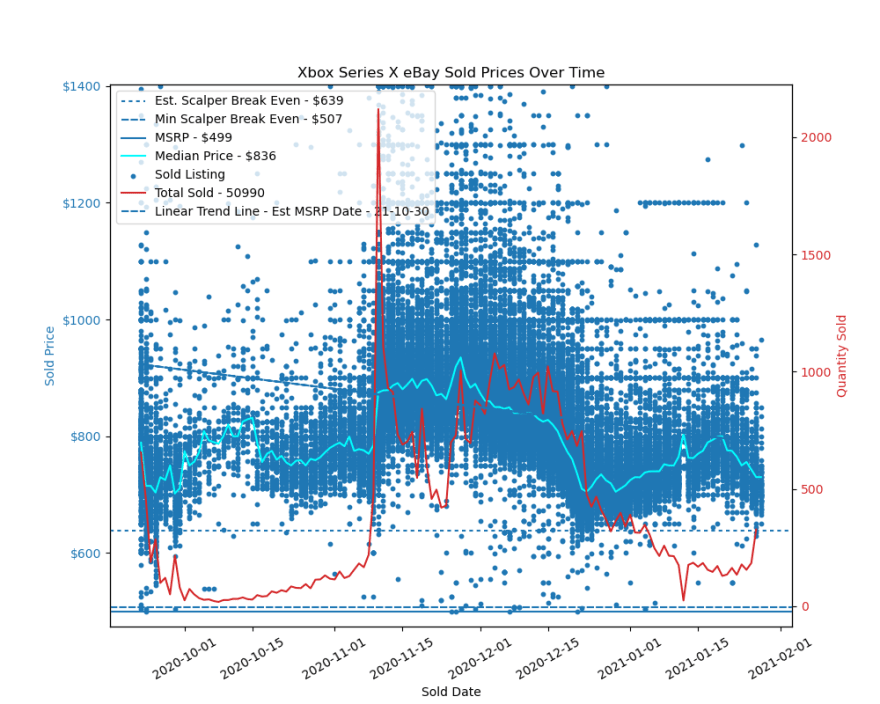 StockX is nearly as large a seller of Xboxes as eBay, with 63% the number sales as eBay, over $27 million in sales dollars. 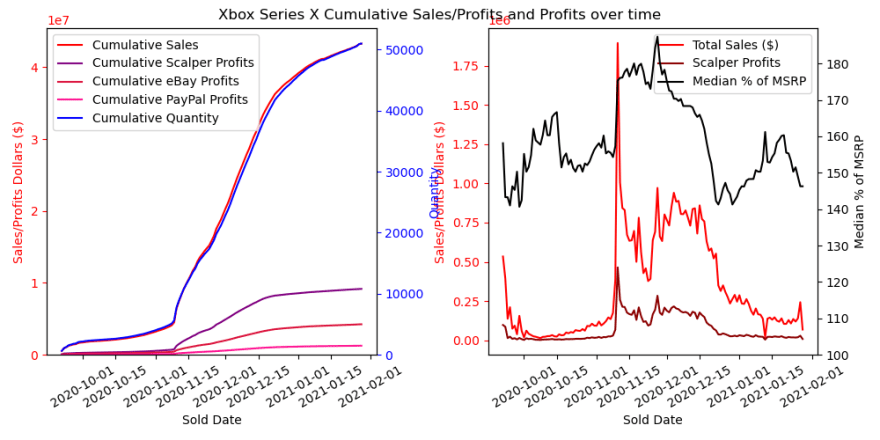 For the cumulative sales/profits, profits have nearly leveled off for scalpers, still plenty for them but they are no longer profiting quite so much, though this is more due to sales volume decreasing than pricing going down.

Below are the weekly eBay and StockX sales compared to the VGChartz sales of that week. I did have to estimate the StockX # sold each week, using the eBay number as a proxy and using the ratio, which the totals are below. These numbers combine the Xbox Series S and X. The most interesting trend is that more people are turning to resell their consoles each week compared to the total sold commercially. 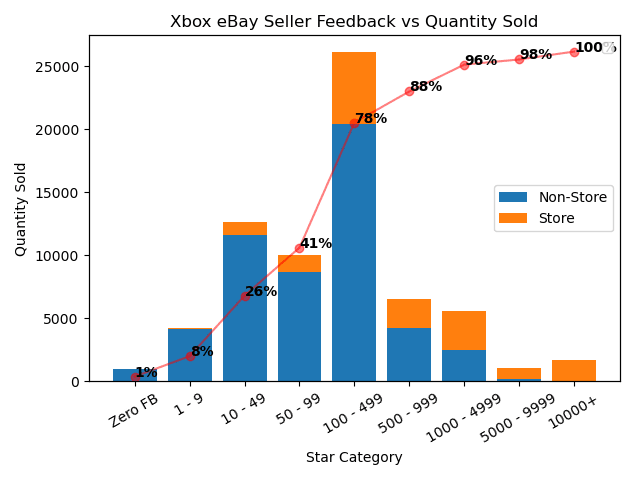 Much the same as the computer hardware, the most common seller feedback is in the 100-499 range, and about 9% of the listings are likely scams with sellers having <10 feedback. 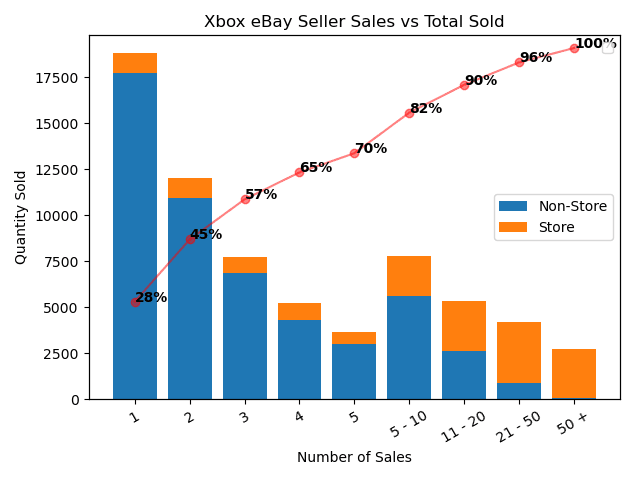 At least 28% or even up to 45% of all the Xbox sales are 1-2 sellers. Now this could just be the case that scalpers are making secondary accounts to throw off the scent, but that would not line up with the sales feedback distribution. I believe a number of people just got a console and figured it was in their best interest to sell it rather than use it. 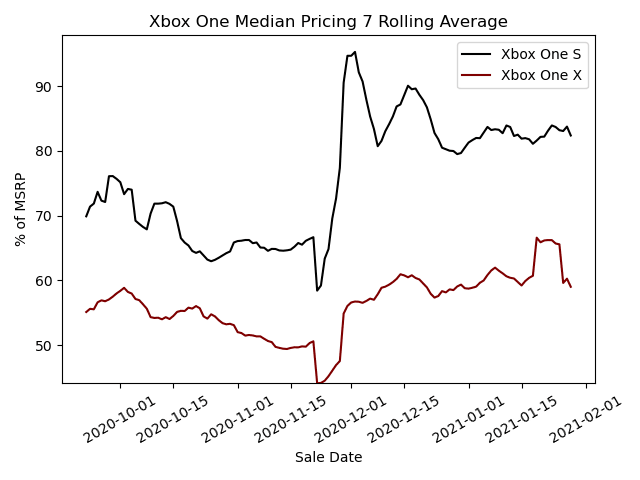 Looking at the Xbox One S/X, there was a drop and then spike in sales after the Series S/X shortly after launched, which I am not too surprised as people were selling their old consoles when they got a new one, especially given the backwards compatibility, but the increase in price is surprising. It could be contributed to more “bundles” as people are selling their consoles with much of their games perhaps.

Python in the Browser? Ok let's do it!