Firstly, I must say I am taken aback by the reception my first article got. I was not expecting it to get nearly so much publicity and I want to thank everyone who shared it. It went everywhere from PC World and PC Magazine to Bloomberg

rg.com/news/articles/2020-12-16/playstation-5-scalpers-use-bots-to-hunt-down-scarce-consoles) and internationally, even being discussed as UK politicians seek to implement bans on scalping bots.

Over the week I will provide an update up on how pricing has changed in the past month since my first article, especially with the recent tariff increases on graphics cards, starting with Zen 3.

Overall Zen 3 pricing has stabilized well above the profitability cutoff for scalpers. My initial thoughts of the 5800X pricing continuing to fall did not pan out, rather scalpers just found their pricing floor early. The 5800X is 25% above MSRP, the 5950X and 5900X are 40% over MSRP, and the 5600X is 30% over MSRP with a slight downward trend. 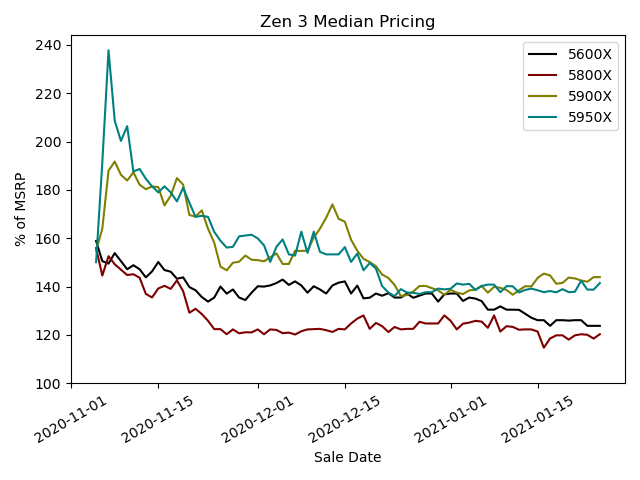 I have also included some numbers for StockX as they too are selling CPUs, GPUs, but especially the consoles. In terms of Zen 3 it is significantly cheaper than eBay to buy on StockX. I would guess partially due to lower fees (~12% vs eBays ~13%) but largely I would guess due to obscurity and StockX sellers are having to drop their prices to get buyers. 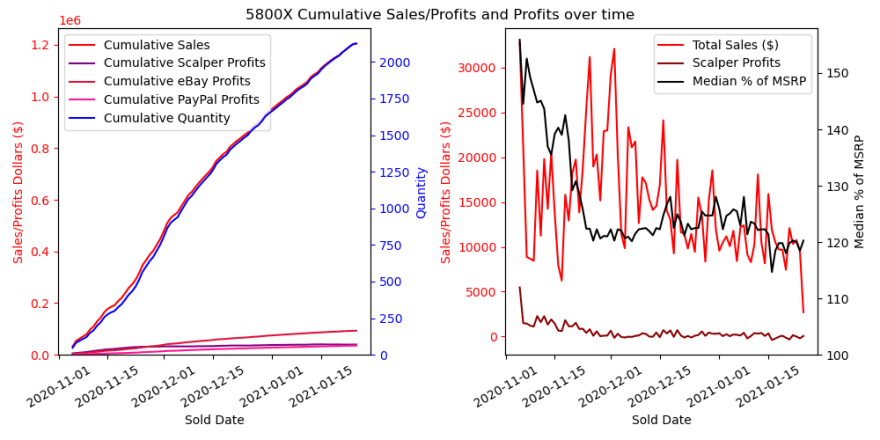 In order to dive deeper into the pricing trends over time, I have plotted out the cumulative sale and profits over time. It can be pretty clearly seen that on eBay, there’s a near linear relationship of sales vs time for most Zen CPUs. That is in terms total dollars/day, eBay sells about the same amount (on average). I expect this is a pretty natural supply vs demand curve, as prices go down, more people buy. The 5800X is again the odd man out, where its curve has started to level off somewhat, perhaps a saturation of the market, and while scalpers have made more than eBay & PayPal for the other CPUs, for the 5800X it’s eBay that’s really profiting. 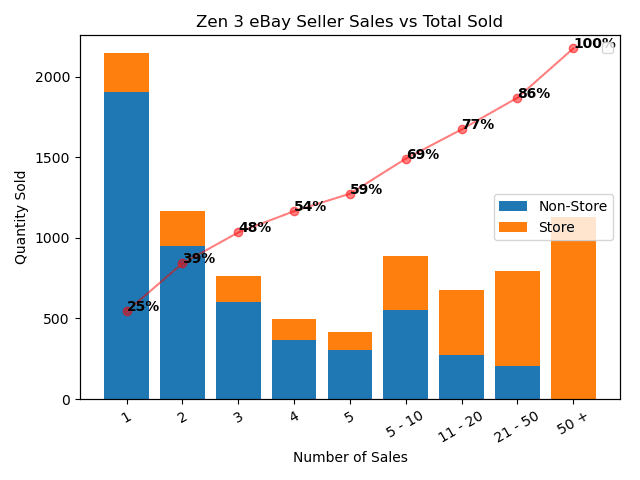 Looking into who the sellers are, I graphed the quantity sold vs the number of sales, and the seller star categories, grouping all of Zen 3 together rather than by individual CPU. For Zen 3, 25% of the CPUs were the only CPU the seller sold, 39% sold one or two CPUS. I expect these are the more “opportunistic” buyers who happened to buy one at Best Buy and resold it for a quick buck. Once we look past that, 41% of sales were buy sellers who sold 5 or more CPUs, sellers who definitely knew what they were doing, could upfront the cash to buy a multiple CPUs and are the most devoted scalpers. Further the more CPUS a seller sells, the more likely they are that it’s an eBay store which clearly means they are more sophisticated in their approach. 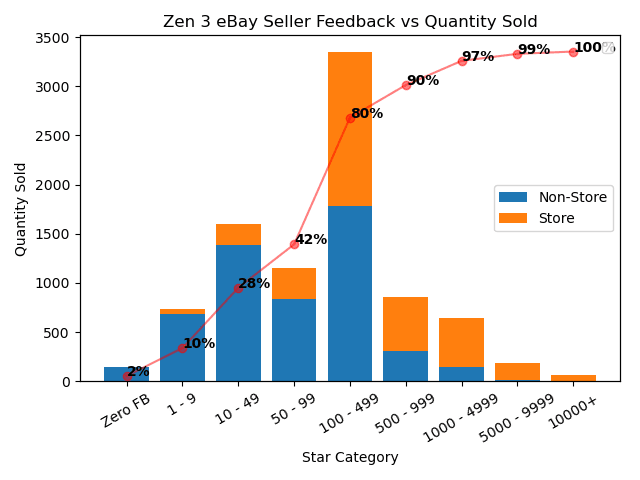 Comparing feedback, at least 12% of sellers I think fall into the suspicious range, who have 0-9 feedback. They could be real, but clearly they are new to eBay. The most common seller has 100-499 feedback, with 38% of sellers like that, and then it levels off fast. 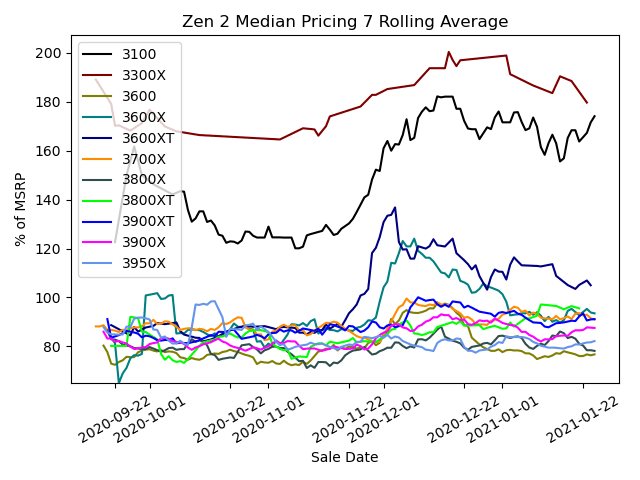 Thinking beyond Zen 3 pricing, I wanted to know what the impact was on the past generations of AMD CPUs, and Intel. For Zen+ and Zen 2 CPUs, at the same time as Zen 3 released, there was a general increase in their prices as well across the board. The average Zen+ CPU increased ~33% while for Zen 2 it was closer to a 25% increase. The real outliers are the 3100 and 3300X, which jumped closer to 45% of their previous price. I would suspect this is due to buyers having their whole system ready to build except for the CPU and just buying something to tide themselves over until they could get the Zen 3 CPU they desire. Original Zen CPU prices don’t seem to be as affected. 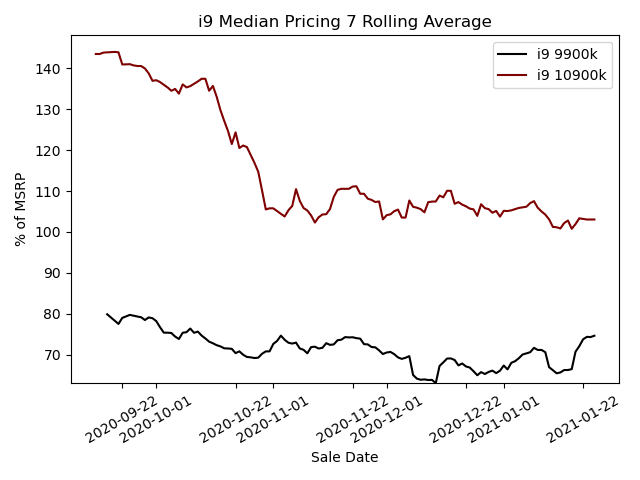 For Intel, it looks like the October 8th launch date annoucement, drove down pricing on the i9s before the actual launch date of November 5, perhaps as users wanted to upgrade or just weren’t willing to spend that much anymore. Prices dropped ~$50 on the i9 9900k and nearly $200 for the i9-10900k for resellers. i7s seem less affected along with older generations of Intel CPUs, presumably those who are willing to spend less or just doing an in-place upgrade are less sensitive to movement on the high end.

The full set of graphs for the various CPUs is below. Note that profit curves are not very accurate for older CPUs due to them mostly being resales, best to just ignore the profit curves for previous generations.