Checking in on the RTX 30 series and Big Navi, the only thing I can say about my previous commentary is that I was wrong. I had predicted the launch of the 3060 Ti would bring pricing down, and that was very wrong. This is in no small part due to the new tariffs on graphics cards which hiked prices by 7-25%, and scalpers… hiked their prices just as much. The 3060 went from 160% launch price 1/1/21 to now 210% launch price and has recently fallen down to 190% of launch price. The 3080 is a similar story, from 170% at Christmas to now 200%. The 3070 has grown more modestly to “only” 170%, though the 3090 seems unaffected. I suspect its price is already so high that those who felt a need to buy it have already bought and now only those who want to buy are buying and can wait for semi-normal price.

For the prices below, I have left the break evens as they were from before the tariff increase to show how much prices have changed and the scalper profits using the old MSRP as I suspect most sales are from cards purchased before the increase. 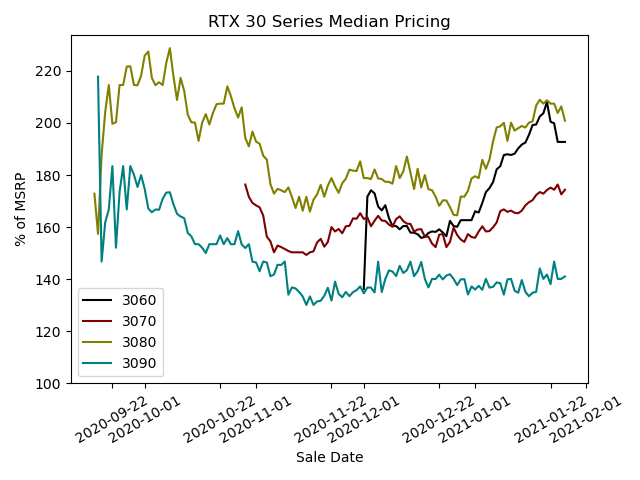 Comparing eBay to StockX for Ampere, while the volume on StockX is smaller, it is not insignificant. Over $11.5 million in sales, $2.8 million in scalper profits, over 10,000 sold across the three cards, scalpers are reaping in the profits all over. 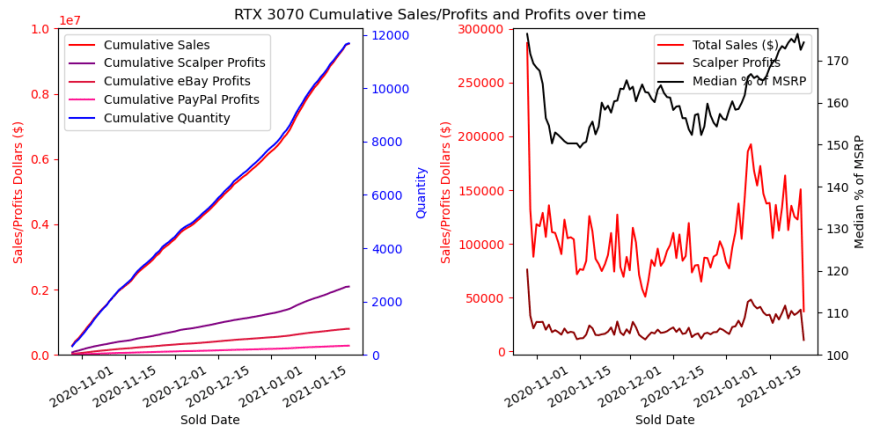 Looking into the cumulative sales and profits over time, in the case of all four RTX 30 series, there was a sudden surge in sales between Christmas and shortly after the new year. 3090s seem to have surged before the new year, Christmas sales I imagine, but the other three cards had a run on sales once the tariffs were announced, briefly doubling or even tripling the normal sales volume for any given day. 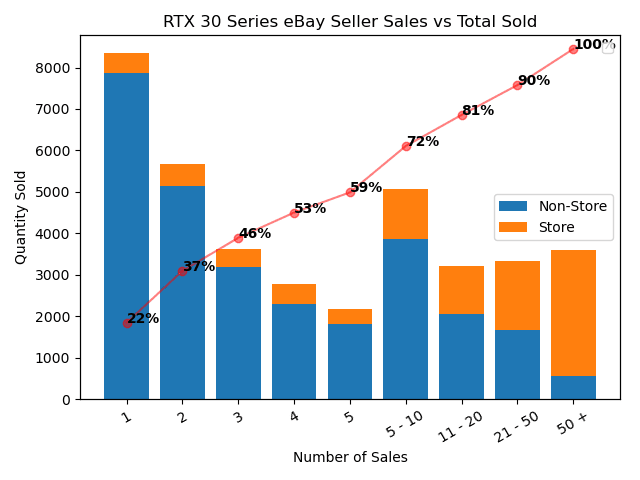 When it comes to the sellers of the RTX 30 series, there are far more no-store sellers vs store sellers compared to Zen 3, despite a ~5x difference in sales volume between the two. Further for those sellers selling 5 or more GPUs, it only makes up a quarter of the sellers, while 61% sold 5 or fewer, with 22% selling just one and just over a third selling 1 or 2. It seems many more individuals were lucky to get their hands on an RTX 30 series and turned to eBay to make a quick buck than Zen 3. 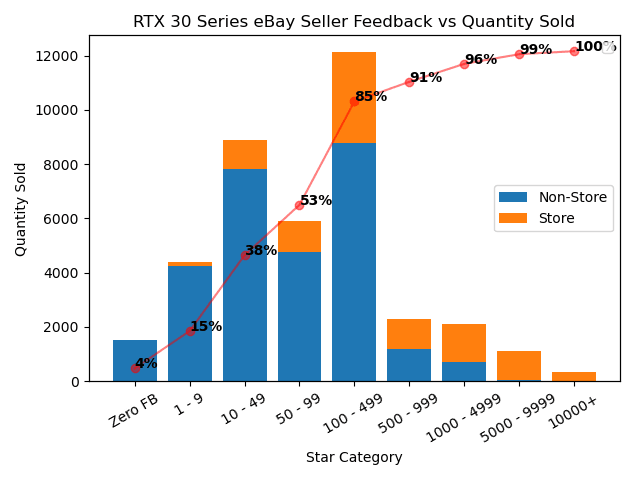 In terms of feedback, at least 4% of listing are scams with zero feedback, but the curve followers a normal curve as to be expected, with the 100-499 range being the most common with 31% of sellers. 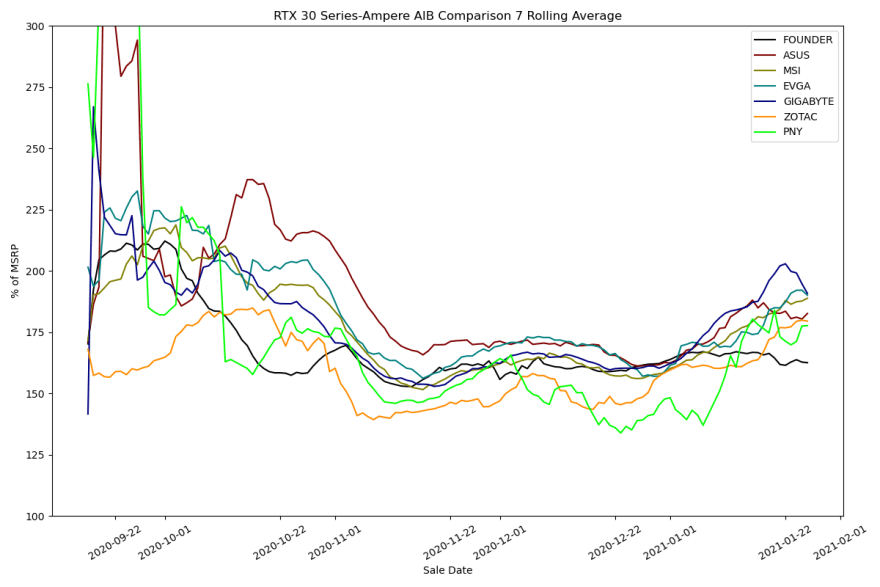 A natural question when it comes to the RTX 30 series is does AIB reseller have any impact on the price someone is willing to buy from a scalper? In terms of sheer sales volume, the Founder series has 9800 sales, with EVGA coming second with 6867 , then MSI with 5826. Despite that it appears ASUS is consistently priced higher than others, often by 20% for periods, while ZOTAC and PNY are the lowest priced by on average closer to 15%. This could just be an indication that ZOTAC and PNY don’t sell as many high-end cards or a lack of trust in the brand. 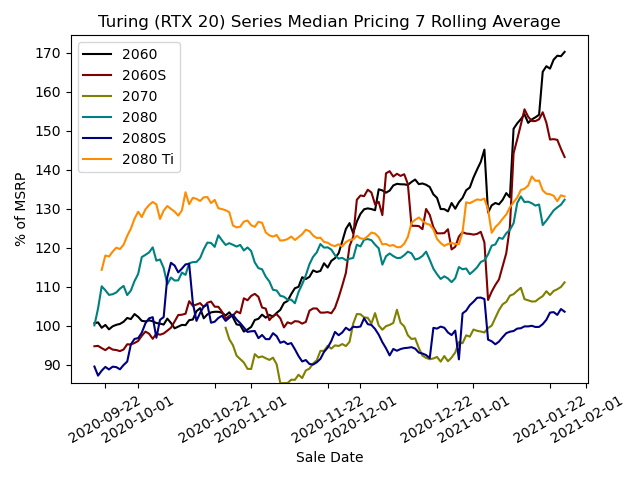 Finally, what impact did the release of the RTX 30 series have on previous generations of NVIDIA graphics cards? For Pascal cards, initially they stayed stable, but the new tariffs have increased the resale prices of all GTX 10 series cards, by about 50% for most of the cards. Turing’s RTX 20 series is also affected though again to a lesser extent, mostly impacting the lower end cards, the 2060s and 2060 Supers. However, the real rise in pricing was for the Turing RTX 16 series cards, all of them going up 50-60% in price since the launch of Ampere. It doesn't stop with those either, even the GTX 900 series have seen price nearly double for a few cards, though still well below their initial MSRP.