AppleScript is a small language Apple included in OSX to automate some tasks.

It's almost unknown, even though knowing a few things about it could be quite useful for a lot of OSX users.

How to use AppleScript

For simple commands you can just type them in the shell. As you can probably guess these change audio volume to 0% and 100% respectively:

Since it's just shell command you can also put them in shell scripts like these:

Or you can use it like a regular Unix scripting language. Weirdly, this was not supported for most of AppleScript's existence. AppleScript was introduced in 1993, and only OSX 10.5 in 2007 added support for this:

You can display simple dialogs. Here's some code asking user if they prefer cats or dogs: 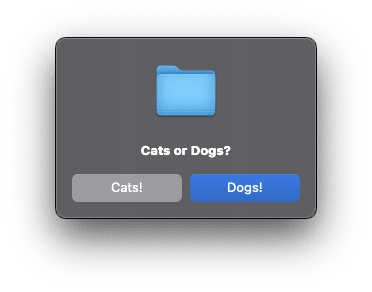 Notice all the weird English-like syntax. If you think this will make coding easier, that's really not how it turned out. All AppleScript coding involves a lot of trial and error to get your syntax accepted, with no clear rules. It was an experiment that convincingly failed.

In principle AppleScript can do a lot to control applications. For example this opens new window in Chrome, then presses Cmd-T, types URL, and presses enter:

In practice this kind of code is extremely unreliable, so if possible you should try other solutions first - in case of Chrome there's tons of much better APIs for it already.

Here's AppleScript FizzBuzz. For some reason log prints to stderr instead of stdout:

But that's boring. Let's display a dialog, and then actually say the result. To keep the program simple I skipped all the error handling, so it will just crash if you give it wrong input. 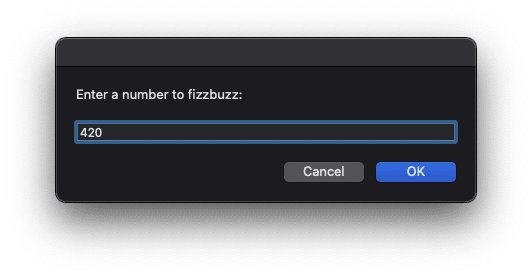 Should you use AppleScript?

Not really. It was always a bad language, scripts break every OSX or application upgrade, and nowadays a lot of it is locked for "security" reasons, or just stopped working. Writing anything in AppleScript is exercise in painful trial and error, both on API side, and language syntax side.

Occasionally there could be a task which cannot be done in any other way, so it might be good to be aware of AppleScript as the last resort.

All code examples for the series will be in this repository.

Code for the AppleScript episode is available here.

I want to improve my coding skills, but I don't know where to start. Can anyone offer advice?

create a window in SDL2 for any OS