In the early days of the web HTML was at its humble beginnings then CSS came around and it allow web developers to add effects like color and changing text font sizes. Fast forward to the year 1995 JavaScript was invented and it opened the door for developers to add dynamic effects to a web page like Animations and Popups. The latter was heavily misused for advertisement purposes and gaining user attention.

Years passed by and JavaScript was the de facto technology for adding animations to HTML elements and developers who did not know how to program can seek the help of a JavaScript programmer to complete some part of their project that require stuff like animations.

With CSS animations you can move page element around, change color based on user interaction and with transitions you can change property values over a specified duration all without JavaScript.

The following HTML and CSS will be used with slight modifications along the way. Please save them and make sure the CSS is linked with the HTML.

And kindly note that all screenshots are from Firefox 70 web browser and its Developer Tools.

When starting out with CSS animations there is a particular technical term that we need to familiarize oursleves with and that is keyframes. Keyframes make animation possible.

From the specification (emphasis mine):

That's pretty straight forward, but now the question is: How can we translate this theoretical definition to code? To answer this question we will have to know how keyframes are specified.

After the @keyframes at rule three things have to included:

The keyframes name is the name of the animation and it can be a custom indent or a string and the name is case sensitive.

This is the block that will contain code that specify how the animation will behave.

This specify the starting and ending position of the animation using a combination of from and to keyword or comma-separated list of percentage values.

All these can be summed up in the code snippet below:

If you declare multiple @keyframes rules with the same name (i.e the animation name), the cascade comes into effect and the last one in the document order wins, while all preceding ones are ignored.

Keyframes is just part of the picture when it comes to creating animations in CSS and some properties ensure that it works as expected. They are:

These properties are bound to the element that you wish to animate.

This is the name of the @keyframes at-rule that decsribe the animation keyframes.

Update the .box with an animation name, we'll call it slide:

The animation-duration property defines how long an animation would take to complete one cycle.

We'll make the animation last for 5s for simplicity.

With these two properties in play we can animate the box by setting up a keyframe using the @keyframe at rule.

Save and refresh your browser. You will realize the box will not move. Can you guess why?

When we talked about CSS positioning we made it clear that offset properties like top,left have no effect on an element with its positionproperty set to static.

Use "Inspect Element" on the box and you can confirm this in the Developer Tools.

A simple position: relative applied to the box will fix this issue.

Go ahead and save the file and refresh the browser, the box will now move as expected. You can also check the Animation tab in the browser Developer Tools to note details of the animation. 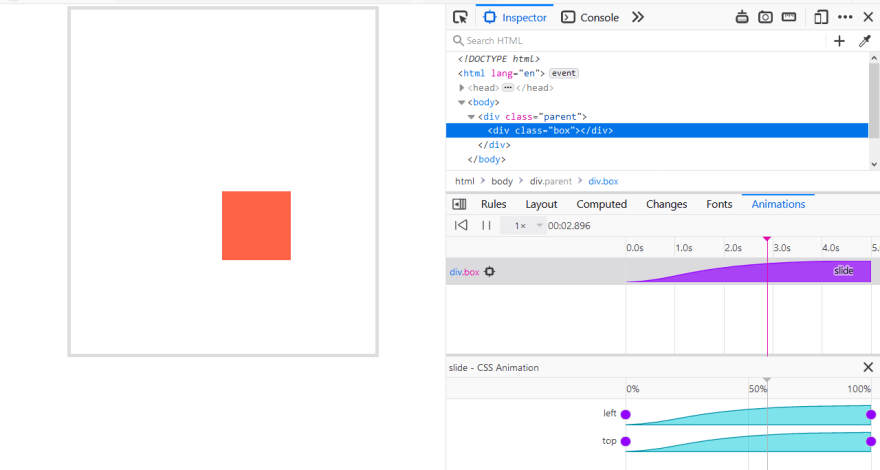 This specify the delay before an animation starts. This is as simple as its name.

Save and refresh your browser, the animation will start after three seconds.

By default the animation will run just once, using animation-iteration-count we can specify the number of times an animation should run.

Added to the animation-delay of 3s we get:

You can confirm this in the Developer Tools after the animation execution. 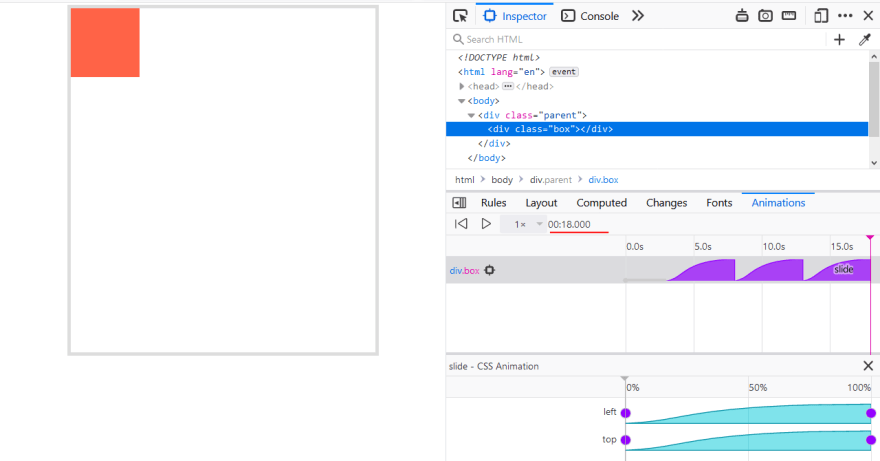 The effect of this property is really cool. If you want you can delete the animation-delay property just to speed things up.

Save and refresh your browser.

You should experiment with the remaining values.

The animation-timing-function accepts the following values:

Note the speed of the animation at the beginning and at the end.

The animation-fill-mode property defines what values are applied by the animation outside the time it is executing.

This is quite tricky, so let's do some explanation.

By default CSS animations do not affect an element before the first keyframe or after the last keyframe.

Using animation-fill-mode we can override this behavior and the animation can still be in effect after its execution time.

Observe the result in the browser and take note of the execution time of 15s (excluding animation delay) which means the animation has completed but with the animation-fill-mode in play the box retains the last keyframe of the animation. 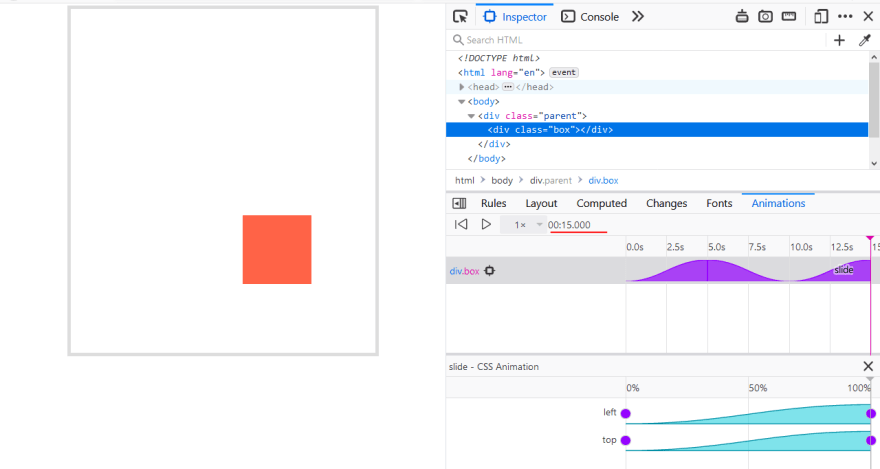 This specify whether the animation is running or paused.

It accepts the following value:

Save and refresh your browser, you will realize the box will not move as the animation is paused.

You can click the play button in the Developer Tools to run the animation. 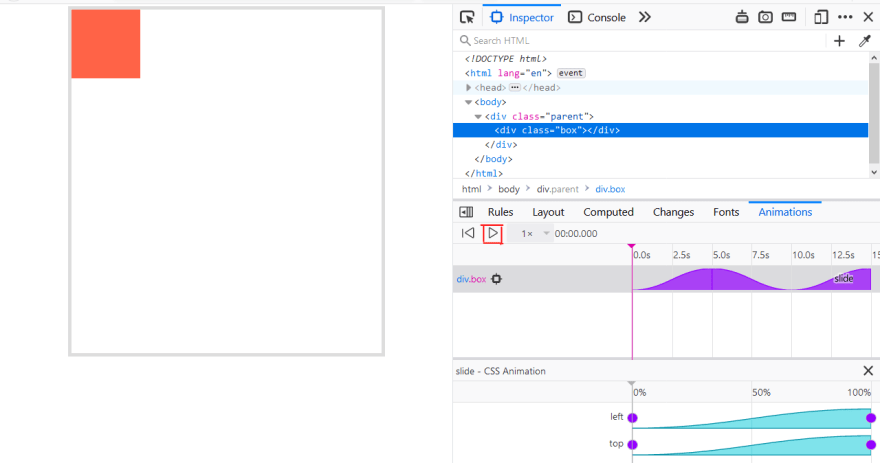 Armed with this we can re-write our code as

You should know that all these properties are ignored in the keyframe block, with the exception of animation-timing-function.

CSS Transitions are presentation effects and they allow property changes in CSS values to occur smoothly over a specified duration.

To create a transition effect, two requirement must be satisfied:

The following properties are used to create transitions:

The transition-property specifies the name(s) of the CSS properties to which transitions should be applied.

You should comment or delete the keyframes and all related animation properties from the box before proceeding.

Now update the .box with the following:

The duration over which the transition should occur.

At this point we can see some transition effect based on human interaction. We'll check when the user Mouse over the box and then increase its height.

The effect in the browser when the user mouse over the box:

This is similar to animation-timing-function and it specifies the speed of the transition.

These values have been explained earlier with the exception of step-end, step-start and the steps() function.

The best way to understand step-* family of values is to write to some code.

Update your code with snippet below and don't forget to save.

Switch over to your browser and Mouse over the box, the height of the box will increase sharply at the end of the duration specified with the transition-duration.

Make sure you have the Developer Tools opened and you've switched to the Animation tab.

The step-start is the opposite of step-end and the animation will occur instantaneously when you Mouse over the box.

On the other hand the steps() function allow you to specify the number of steps the animation should take. It accepts two parameters:

Switch to your code editor and update your code:

If you update the value to steps(2, end) the step direction will be different.

In the image below the blue part in the second panel indicate when the transition will start as a result of the transition-delay property.

We've come along way but i have left out the following as they seem advanced:

If you are feeling adventurous you can read Andreas Müller post on CSS animation by creating some loaders. 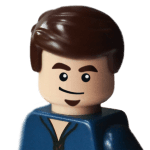 The next topic is more of theory than code and it's about Naming Conventions in CSS.