At first glance of the title, you might wonder, a history lesson in CSS? Well to appreciate the current state of CSS lets literally go back in time to know how it all started, its purpose of creation, its evolution, and what the future might hold.

We can trace the roots of CSS back to the year 1994 when Håkon Wium Lie proposed it while working with Tim Berners-Lee at CERN.

At the same time, several stylesheets were proposed and discussions on public mailing lists and World Wide Web Consortium (W3C) resulted in the first W3C CSS Recommendation being released in the year 1996. Bert Bos also made an influential proposal and became the co-author of CSS1 and therefore regarded as one of the creators of CSS.

Before the creation of CSS, Stylesheets had existed in the 1980s at the inception of Standard Generalization Markup Language in the form of DSSL (Document Style Semantics and Specification Language) AND FOSI (Formatting Output Specification Instance), both were not suitable for pulling stylesheets from multiple sources. Which led to the creation of CSS, thus removing this barrier.

Over the years CSS has evolved with additional features that havv elevate its status from a simple styling language. Some effects like Animations, Transitions, Transforms that were only possible with JavaScript are now possible with just plain CSS.

When we give a detail or brief history of a technology associated with the Web (or software in general),we cannot do without mentioning its Versions that has existed over time and CSS is no different. Versions of software can give us a timeline of the development of the software and each version number can indicate what was added or removed from the software.

CSS1 or CSS Level 1 was released in 1996 and had features for customizing text on a web page and changing background color. It also had properties for spacing words, letters, and lines of text. Web browser support was minimal and thus prevented the popularity of CSS Level 1 for several years.

CSS level 2 (CSS2) specification was developed by the W3C and published as a recommendation in 1998. Its added properties for positioning that allowed CSS to be used for page layout . It also introduced styles for other media types and more sophisticated methods for selecting elements for styling.

CSS 2.1 was a revision which fixed some errors in CSS2. It removed features that were poorly supported and adds already implemented browser extensions. Due to the nature of W3C Process for standardizing technical specifications, CSS 2.1 Specification switched from Working Draft status and Candidate Recommendation status for several years until February 25, 2004 when It became a Candidate Recommendation only to be reverted to a Working Draft on June 13 of the same year.

It attained a Candidate Recommendation status on 19 July 2007 and was updated twice two years later in the year 2009. The following year, on 7 December 2010 , it was again reverted to Last Call Working Draft due to some changes and clarifications.

Work on CSS3 began in 1998 a year after CSS2 was published. CSS3 is an extension of CSS 2.1 that adds features like Transforms, Animations to name few and it's not a single specification like its predecessors (CSS1 and CSS2) but rather a different modules of features that can be worked on by different authors at different paces. Each module is a standalone specification for a subsection of CSS, like color, selectors or backgrounds as shown in the image below. 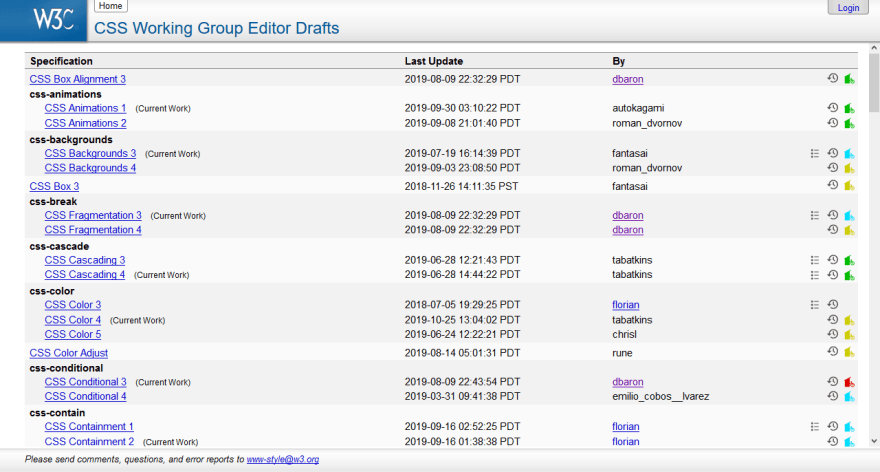 That's it for the History Lesson. Next, we'll talk about the CSS Specification(s).

What Are Residential Proxies and Why Use Them?