Forgive me if the last paragraph seems intimidating to you if you've not programmed before and if you follow this series till the end, you will definitely write a few programs (in the JavaScript section) to perform basic tasks albeit in the web browser.

I know this post is about CSS variables and some will argue that CSS developers are not really programmers, but we just need to know the uses of variables and where they originated from which is why this post started the way it did.

Variables have been a requested feature in CSS since the year 1998. Dave Hyatt and Daniel Glazman shaped the first concrete proposal in 2008.

Some were concerned that CSS needed no variables and Bert Bos considered CSS variables harmful.

The question now is: Why variables in CSS? When you work on a project (big or small) you'll use CSS for the layouts, backgrounds, colors e.t.c and some property declarations will be duplicated across multiple CSS rules. For example:

Now, let's see how we can use variables in our CSS code.

I'll be making use of the specification in subsequent explanations, so I'll encourage you to open the link in a new tab or a new window in your web browser.

Save the following HTML with the .html extension and create a blank CSS file and make sure its linked with the HTML file. All HTML snippet will be in the body tag.

And kindly note that all screenshots are from Firefox 70 web browser and its Developer Tools.

With that out of the way. Let's start.

any property whose name starts with two dashes (U+002D HYPHEN-MINUS), like --foo

I believe this explanation is straight forward but lets clarify it with code.

Using our previous example, we can declare the color at a single place and we will be able to reuse it in the p and span elements.

Now that we have declared our variable, You might ask: How can we access the variable? We can access our declared variable using the var() function.

The job of the var() function is to substitute the value of the variable into another property.

Its syntax is as follows:

Using our previous CSS example, the

We'll demonstrate the fallback value later, but for now let's update our code to use variables. Let your CSS match the following:

Save and refresh your file. The p and span text element will be a variant blue.

Custom variables are inherited, which means a child element can use the value of a variable in its parent's element.

You will notice that the color of the p element is actually inherited from the :root element.

Update your p element CSS rule to match the following:

Save your file, refresh your browser and note the change in the Developer Tools. You will realize the p element is now using the value of the variable we declared in its CSS rule and not the inherited value from the :root element. The span is also blue because it's a child element of p.

From the specification (emphasis mine):

A variable can be invalid if it uses a valid custom property, but the property value, after substituting its var() functions, is invalid.

This means: when we declare a property in our CSS rule and then we decide to assign it a value using a variable, if the variable contains a value that is invalid to this said property, the browser will use the property initial value* unless we explicitly specify a fallback value. Say what?

*The initial value is the elements default value.

Given the code snippet below.

Save and refresh your browser. You'll notice the background color is white. Why? What happened?

We declared a variable with the following:

This is fine and the variable is valid, then we used it for the background-color in our div element.

This is the same as writing:

The last time i checked 23 is not a valid background color, so the browser used the background-color initial value which is white (#ffffff in Hex and rgba(0,0,0,0,0) in rgb format). You can see this in the Computed tab of the Developer Tools.

This means we should note our variable values and make sure they will work when we need them.

A variable can also be invalid if its value is invalid. The spec states:

While <declaration-value> must represent at least one token, that one token may be whitespace.

This means: if the value of your variable is empty it will be invalid and this is when the fallback value comes into the picture.

Update your CSS to match the following:

It's evident from the code above that our --color variable has an empty value. Save your file and refresh your browser. The browser will apply the green fallback color.

Somethings to note about CSS variables or custom properties:

Based on data available at caniuse, the global usage of CSS variables as of November 2019 is 93.16%with decent browser support. 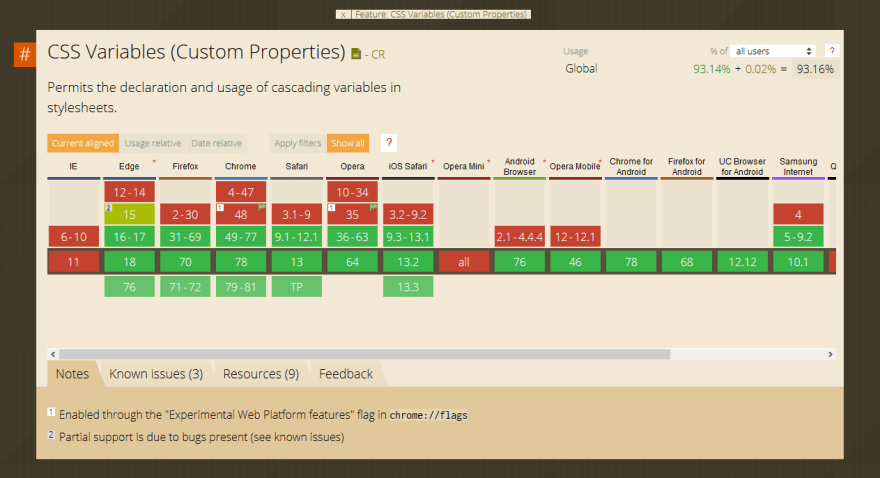 THINGS I LEFT OUT

I consider this topics "advanced" for this beginners post.

You might be feeling adventurous, so here are some links for you:

We are getting closer to CSS properties that will aid us in web page layouts.

We'll start with CSS Floats. Next.

Updated July 1, 2021: Changed a statement in paragraph 4 under "VARIABLES AND INHERITANCE" to reflect that you can only reassign a variable in child elements and not change them.