Sprint 3 is here! What are we doing? Then next logical task we need to do now that how the quests and game data are stored have been worked out, is to make the user aware of the new quest started by the game creation flow. This requires three things:

In diagram form, our architecture looks a bit like this right now: 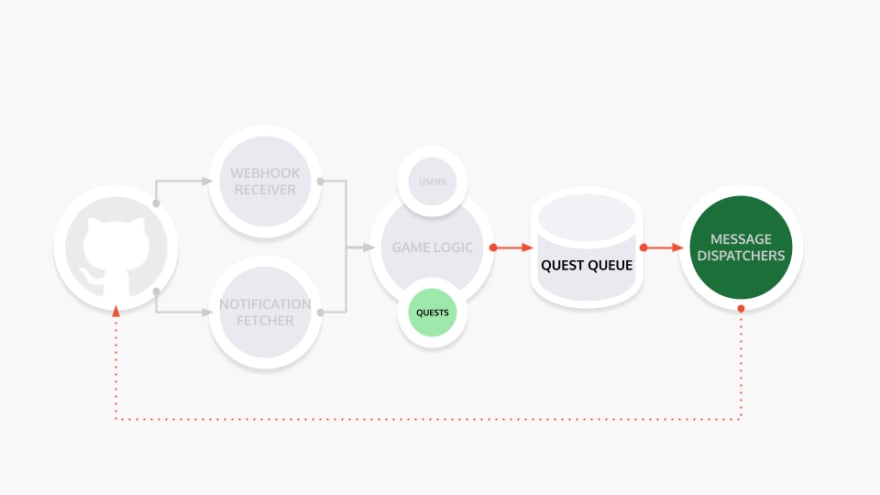 I'm now renaming "Task Queue" to "Quest Queue" as it's now primarily a list of active quests, each of which is either new and awaiting processing, or awaiting some trigger action from the user.

The game's "tick" loop will run every few minutes (I'll tune this to balance cost and processing time), and will mainly scan through this list of quests to check whether an action needs to be taken. But will sometimes schedule new quests to be dropped on users. This means Quests get processed under three scenarios:

There needs to be a few different triggers that the game must detect to progress the game, although I'm not addressing them this sprint, it makes sense to think about them:

We can poll GitHub for this stuff, but if we want the game to be responsive for players (i.e. be able to respond within a few seconds to minutes of a player's action), then we potentially need to poll for a LOT of stuff from GitHub every few minutes, which is going to be too much, for both them and us. So we need to rely on as many webhooks and notification features as possible. That'll have to be addressed in the next sprints, but it does mean at this point we shouldn't think too hard about building a polling loop as it's probably going to be a dead-end approach.