To top off this sprint, I'm going to start building some character profiles. I originally thought about making this automated to maintain, but then realised that was going to be a big waste of time, so I put them together by hand.

Since each "Character" needs to post from a separate github account, I need to register a new github user account for each of them, and make use of GitHub profiles to give them some backstory.

This is where I take off my programmer hat, and put on my game-dev hat to start talking about fiction and lore. I want LGTM to have a rich world because I feel this is how to get players emotionally invested in the game and motivated to figure out how to achieve the tasks that they set out to do. I think existing git learning material can be too dry for some people. Certainly, it did for me - I didn't really know why I was doing the things the a tutorial asked me to do or why it was important, or when I would use them.

Where seasoned programmers know by experience the benefits of using git, and the problems they can avoid by doing it, and therefore need no push to figure out what it's about; I think beginners often don't feel the motivation to learn, because they've not yet experienced the problems that git solves. So I will attempt to get people to learn git through the motivation from wanting to explore this world. We will find out whether this works in practice.

Two of my influences here are Advent Of Code an annual December coding challenge, in which daily coding challenges are presented in the form of a narrative. The narrative has little bearing on the actual coding challenge itself, but the presentation is interesting, and even if the situations are contrived, it adds colour to the event. And Introversion's Uplink, a game that's about hacking, but interwoven through it is a compelling plot told through what might be described as puzzle mechanics; Uplink is interesting in that it starts out like a sandbox game, but the player finds themselves gradually pulled into a much larger plot with big consequences to the (in-game) world. I'd like LGTM to draw from these two influences: players should feel like they want to learn git because that's what it takes to solve these challenges and progress a story, which over time develops into a much larger plot that keeps people engaged. If I can entice even git experts to come and play just to experience what happens in the story, I'll know I've succeeded

Garry is going to be your typical friendly introduction quest-giver. I call him "Garry" because at some point I misspelled "Gary" and decided to leave it, and I've called him "Old Man" because it feels lore-friendly to have an elderly man ask you to do things for him. Garry is a bit of a self-insert. Game-devs like putting a version of themselves into the game, amongst the many reasons for doing it, one of them is it's just easier to write for, since you can give the character an exaggeration of your own personality.

In the case of Garry, he's a bit of a joker and doesn't really pay attention to what's going on around him, leaving all the serious business to his wife Zelma. Garry makes a lot of self-references to being old, and I may slip in references various tropes from gamer or programmer culture where I can.

I'm currently using Ladadori's AI-generated and touched-up profile pictures, but the only one for an older male is this one who looks way too Geralt of Rivia than jolly old man, so I'll keep looking for an alternative.

Zelma is Garry's long-suffering wife, who is brusque and gets down to business quickly. Yet she's kind hearted and wants to help people. She's obviously had enough of Garry's non-sense, as she's not shy about openly insulting her husband. I'd be lying if I said I wasn't drawing a little bit from the relationship I have with my own wife in this dynamic.

I'd like Zelma to be involved in part of the larger plot later in the game, while Garry remains blissfully oblivious.

Again, I'm using Ladadori's excellent profile pictures. This profile pic looks close to what I imagined a Zelma would look like, she has a look of shrewdness that I think is fitting. The only change I intend to make with this one is to give it a slightly more distinct background colour to increase "glancability".

The name "Norret" isn't from anything, it came out of a random name generator, and then I added an extra "r" to match the extra "r" in Garry's name

With these profile Pictures in place, when they have a conversation, the game feels a lot more "complete" 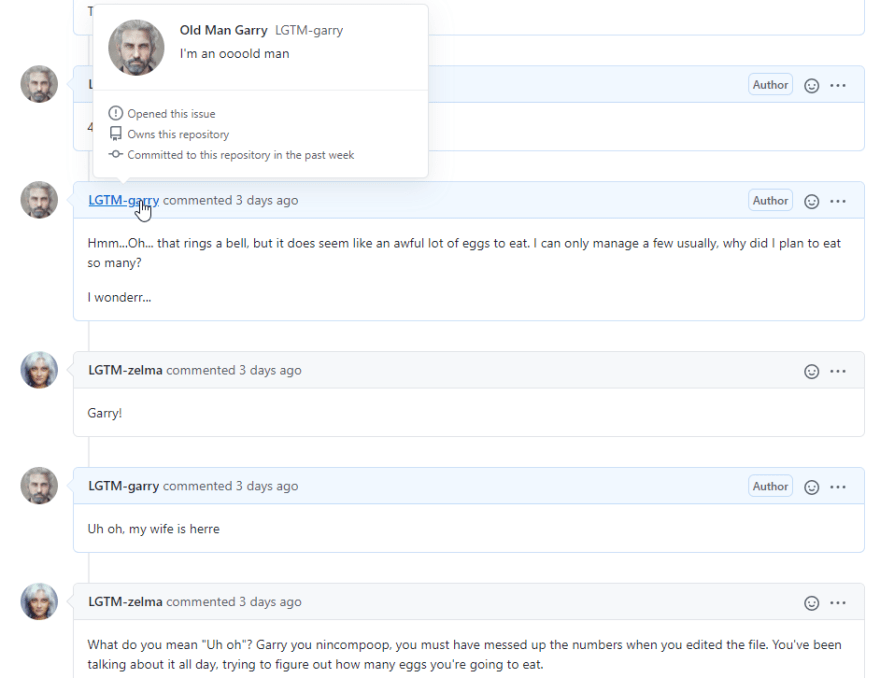 How to Deploy a Monorepo with TurboRepo on Heroku