Continuing on from last post, I'm adding more types of stages to the stages module which contain the actual implementation of quests. This is an exciting time because after all the framework building, this is finally where the core of what LGTM is begins to emerge. Again, most of the work is now in the stages module, the code for this post is at commit 0e67f0d

The previous post describes the CreateIssueStage() which creates an issue. But we also need to be able to create comments, so I have a viry similar-looking CreateIssueCommentsStage(). The reason it's comments plural is because this stage allows me to define a whole conversation that takes place in the comments section between two different accounts. Makes it easy to convey narrative through a conversation.

In the CreateIssueStage() we created an issue and stored the issue_id in the quest data model. This stage now reads that ID, as it's needed for it to decide which issue to post in.

It simply loops through a list of character and text tuples to post each comment in turn. It additionally stores the last comment's comment_id in the quest storage as well as its post time. The reason for this is in case we have another quest stage that needs to detect emoji reactions to a comment. The comment post time can be used to fetch comments from that date onwards, to avoid seeing older comments no longer relevant to this stage.

The final piece of the puzzle needed to build the most basic form of quest, is to detect a response from a user. This type of quest will ask the user to "find out" something in a git repository or the history or metadata, and the user must respond with an answer. We have to be able to detect the correct answer returned, so this stage checks for user replies:

At the core of this is the regex_pattern. This stage will simply run the provided regex pattern against all comments seen since the last check or the last post date provided, and when it matches, the condition passes.

Some of the code also deals with minimizing how many comments need to be checked, by only searching from the date this stage was last run (using the stage data store facility), or the last post date provided from the quest data store.

There's also some extra code that relate to capturing the result. This could be useful if we ask the player a question like "which do you pick?" and want to store the result. We can use this to check for a reply and then store the matched group in the quest data storage.

Finally, we can also randomise the response when there's a comment that doesn't match. So the usage looks like this:

Here, we are looking for the exact number 2 The regex pattern (?<!\d)2(?!\d) uses negative lookbehind and lookahead to avoid matching the number 2 inside other numbers, for example 12 would not be matched. 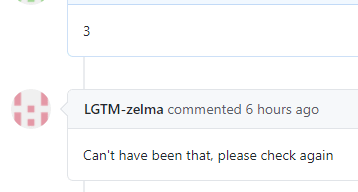 We now are sufficiently feature-complete to author the first type of quest on LGTM, which I'll be calling a "Type 1" quest for lack of better terminology. I think we can split the quest types (and this could govern future dev plans) into:

My first project in django