Some big changes today as multiple things are coming together! Most of the work is now in the stages module, the code for this pots is at commit 0e67f0d

I've decided to instead of using a task queue system for timed events, simply add a DelayStage quest stage that enacts a time delay. This reduces the complexity by knocking out a piece of infrastructure, and was surprisingly easy to write given the existing infrastructure:

The DelayStage uses the prepare() event to write into its stage storage (a new free-form dict value that I've added to the quest data storage model to store stage-specific data) the target timestamp, and when the condition runs next, it tests if this time has been reached or exceeded! Very simple.

Now that we have the code for characters to post github messages, I can add a CreateIssueStage() that will create a new issue in a user's fork, it looks like this:

It has some abstract properties for the character, issue title, and so on; and the business part of the class simply calls character.isseu_create() that's part of the package defined last time. The rest of the execute() event deals with fetching the fork_url, and saving the results in a location of your choosing, so that a stage can output the issue ID created so that other stages can use it.

The reason for the """\ is due to the use of pythons dedent method which keeps intedentation nicer in the source code for multi-line strings.

When this Start event fires, it will use the character defined by character_garry to send an issue to the player's fork, with the given issue title and body. It will also store the issue_id in the quest data model's issue_id key, so that next stages can re-use it.

In order to test, to avoid spamming data somewhere public, I've over-written the test files to fake a fork to a private github repo instead. This usually isn't possible on GitHub during a normal flow, but our system doesn't make a distinction, so happily accepts it as part of a test. 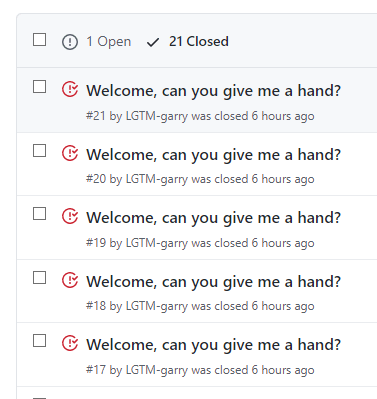