When I first moved to vim from and ide like vscode or sublime text one of my very first issues was trying to preview my website at localhost:8000. There had always just been a button there to do it in all of my other editors, not vim. There are not many buttons for anything in vim. While there is probably a plugin that can run a webserver for me in vim, it's not necessary, we just need the command line we are already in.

You will need a way to run another process alongside vim, here are a couple ideas to get you going that are not the focus here.style

running a development webserver from the command line

Python already exists on most linux systems by default, and most are now on python3. If you are on windows typing python will take you directly to the windows store to install it, or you can also use wsl.

If you are a web developer it's likely that you need nodejs and npm on your system anyways and may want to use one of the servers from npm. I'll admit with these not being tied to the long term support of a language they are much more feature rich with things like compression out of the box. In my opinion they are nice things that you would want out of a production server, but may not be necessary for development.

npx is a handy tool that lets you run command line applications straight from npm without installing them. It pulls the latest version every time you want to run, then executes it without it being installed.

running the http-server with npx 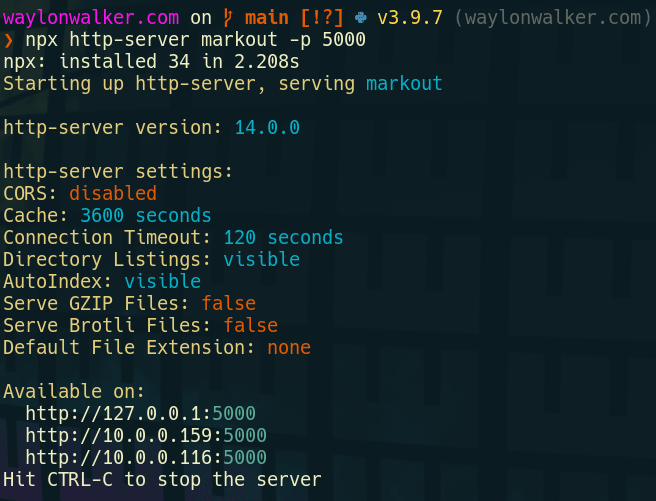