The more I get into Software Engineering, the more interested I am by current 'best practices'. Frequently I have run off writing code before thinking through the complete structure of an app and run into issues down the line due to organization of the code or something similar.

Issues like these are why best practices exist. Today I decided to jump into some of Redux's best practices; namely the structure of the app itself.

The official Redux Style Guide suggests using the (very modular) Ducks structure. Essentially, this structure follows the design pattern of "New Feature? New folder." I am not 100% sure, but this seems to be a newer development in Redux best practices. For example, favesound-redux splits files into "type" folders.

I think this makes sense to some degree, but I largely agree with the Ducks model. If you are debugging an app, you want to be able to locate all files related to the feature you're debugging. 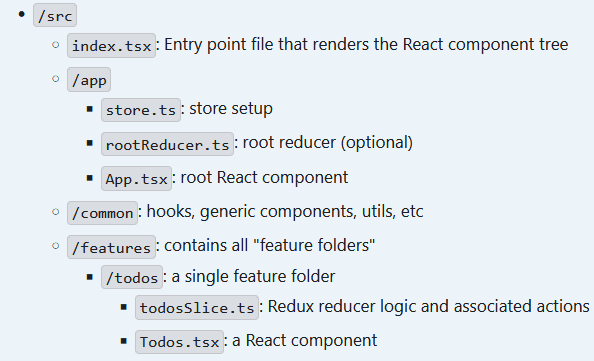 In this scenario, you can see that there is a features folder, which contains the todos feature.

I highly recommend you read the Style Guide for Redux if you have not already.

Start the Study Aid app. I'm not done with my Redux journey, I still feel like there is way, way more to learn.

Once suspended, rydwhelchel will not be able to comment or publish posts until their suspension is removed.

Once unsuspended, rydwhelchel will be able to comment and publish posts again.

Once unpublished, all posts by rydwhelchel will become hidden and only accessible to themselves.

If rydwhelchel is not suspended, they can still re-publish their posts from their dashboard.

Once unpublished, this post will become invisible to the public and only accessible to Ryan Whelchel.

Thanks for keeping DEV Community 👩‍💻👨‍💻 safe. Here is what you can do to flag rydwhelchel:

Unflagging rydwhelchel will restore default visibility to their posts.